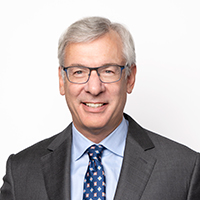 Dave McKay is President and CEO of RBC, Canada’s biggest bank, and one of the largest in the world based on market capitalization. He is reimagining the future of financial services to help RBC’s clients thrive and communities prosper.

An unwavering champion of innovation, big ideas, and creativity, Dave is actively transforming RBC for the future, harnessing the power of transformational technologies like artificial intelligence to deliver digitally-enabled, client centric advice, insights and experiences. Dave is also a leading force behind RBC’s ‘beyond banking’ strategy, building ecosystems, like RBC Ventures, that enable RBC to participate in a broader part of the client journey and value chain. In his home market, he is a passionate advocate for Canada’s future prosperity and preparing youth for the future of work through the support and development of RBC Future Launch, a 10-year, $500 million commitment to help young people build the skills required to succeed in a changing world. Dave is also the Chair of RBC’s Diversity Leadership Council, and is strongly committed to driving RBC’s diversity and inclusion vision forward.

Dave joined RBC in 1983 as a co-op student in computer programming before moving to the organization’s retail banking arm. He then held progressively senior roles in retail and business banking, group risk management, and corporate banking. He became Group Head of Canadian Banking in 2008. During his tenure leading the division, Dave helped reinvent the bank’s retail operations, introducing new technology that has enabled RBC to adapt and evolve to rapidly-changing consumer demands.

Shortly after being appointed President and CEO in 2014, he led the acquisition of City National Corporation, creating a platform for growth with institutional, corporate and high net worth clients in the U.S.

Dave holds a Bachelor of Mathematics and an honorary Doctor of Mathematics degree from the University of Waterloo. He also holds an MBA and an honorary Doctor of Laws degree from the Richard Ivey School of Business at the University of Western Ontario, and an honorary degree from Ryerson University. He is both a member and a Board of Director at the Business Council of Canada, a member of the U.S. Business Council, and a Board of Director with the Institute of International Finance (IIF). Dave also serves on the Catalyst Canada Advisory Board and is the chair of the Business/Higher Education Roundtable, which brings together Canada’s top businesses, universities and colleges to find ways to better link workplaces and classrooms.

Dave is a LinkedIn Influencer. You can follow him here